As I’ve had a fair few new beginnings lately, why not add one more to the ever-expanding list? I’ve recently left the leafy-green comforts of South West London in favour of a significantly hillier Istanbul: a city over twice London’s size that I’m slowly familiarising myself with. As a teacher in London, time was a luxury I’d almost forgotten what to do with – and now it’s been gifted back to me somewhat, I intend on using it! 2019 is all about using this new time to do what I’ve always said I didn’t have time to do: namely reading, writing and getting to know more about my new part of the world.

A huge part of my life is reading, and I’m excited to talk about books on this blog. (Yes, I was an English teacher…) As an introduction, I thought I’d summarise a few of my favourite reads from the last few years, which certainly sounded easier in theory. Here is my list of four of my favourite books of the last four years, which could easily have been twenty favourite books and, quite frankly, I’m counting my ruthlessness here as one of the greater achievements of my adult life.

No surprises here, so I’ll get this one out first. I read this on honeymoon on New Year’s Day this year and made my husband delay our exploring just so I could finish it – it completely swallowed me up. I spent days after thinking about Marianne and Connell, and at one point I turned the book over to start it again, wanting to revisit the characters in the beginning whilst knowing where they end up. It’s one of the most evocative accounts of a first relationship I have ever read: of its evolving dynamics, the concern and misunderstandings of one other and everything that unravels in a relationship. I love how Rooney has shown the power of external factors on a love story: Marianne and Connell’s bubble is burst and attacked again and again by the way they deal with others’ opinions on their relationship, and the confusion in their own mind of what they feel their relationship should resemble. The characters’ struggles to understand one another, and to express this, resonates hugely. Once you have a dynamic, then how can you ever change it if you fear breaking it? This felt like one of the most authentic accounts of a love story I have read in a very long time. Long live Queen Rooney.

This was the first of Levy’s books I have read, and I am keen to read so much more of her writing. A daughter, Sofia, and her mother are searing hot Spain to meet with a bizarre consultant, the last attempt to cure her mother of an illness that has plagued her for years and kept her daughter in a close psychological bind to her. We spend the novel inside Sofia’s inquisitive, frustrated mind, and the relationship is transfixing from the very beginning. The extent to which Sofia’s life is on hold and void of any parental comfort is clear from her smashing her laptop from the very first page: “my laptop has all my life in it and knows more about me than anyone else. If it is broken, then so am I.” Sofia is as emotionally broken as her mother is physically, and her desperate search to find her own identity is often as humourous as it is painful. I want so much more of Levy’s poetic and imaginative prose in my reading life. 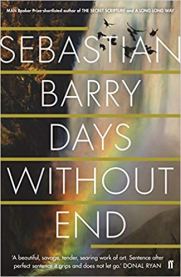 The blurb of this book didn’t appeal to me at first, so I left it – but all the reasons I didn’t pick it up immediately became all the reasons I couldn’t put it down. Barry’s narration is so authentically American and accessible; the violence of the American civil war through the eyes of Irish immigrant Thomas McNulty is hugely compelling, despite it being a genre I would never normally choose. The love between Thomas and another soldier is beautifully written, flourishing amongst the bouts of violence and arbitrary trauma that characterises the majority of their time together. For a book about a violent war, there is also such hope: the kind you find in the smallest of things in the darkest of times. If, like me, you thought this book might not be for you, then I could not encourage you more to read it. 2019 is also my year of reading more Sebastian Barry!

The Outside Lands, Hannah Kohler

Set during the Vietnam war, the unexpected death in the first few pages of Jeannie and Kip’s mother sends their lives spiraling into directions it may never have gone. Their loss is diminished by the assassination of JFK on the same morning: an indication of the wider theme of this novel of the destructive influence of higher powers on the lives of ordinary people. Kohler’s writing is what makes this book so magnificent for me: lyrical and precise without cliché and never seeming self-indulgent. We shift from urbane Californian life to the jungles of Vietnam, breathing in Kohler’s prose easily: at times, it reads almost like a poem in its lyrical description of characters floored by loss and moral dilemmas. I’m continually keeping one ear to the ground for Kohler’s next novel – while still finding it pretty hard to believe that this was her debut.

I’m Sarah: a Londoner in Istanbul largely spending my time reading things, teaching things, writing about things, muttering things as I schlep up steep hills around Taksim Square and petting stray cats along the way.